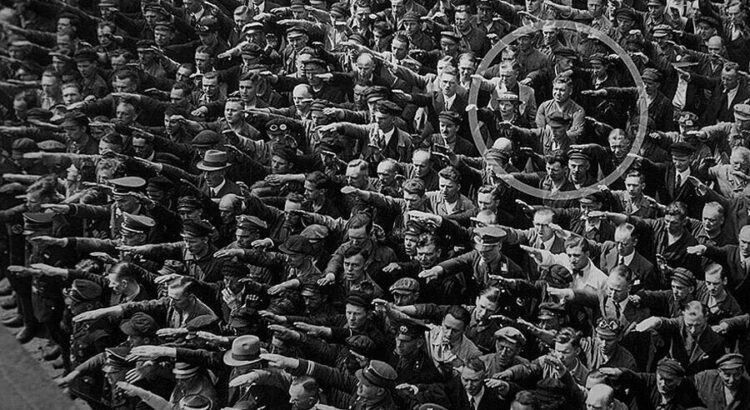 I´m writing a book again and today my focus and topic is: «choice».

Then at 9 O´clock I had to choose on Twitter. It looks like a follower is liking posts that is a bit, maybe, could be, to much far right. Not over the line, but close. Choose to unfollow? Choose to confront? Choose to make a post with fire and rage? Forget it and take a cup of coffee?

A bigger choice was for one man in 1936. All the other workers do the Nazi salute. He chose to not raise his arm.

(In 1991 the German newspaper, Die Zeitth, published the 1936 photo of the non-saluting German, and Irene Landmesser identified the man as her father )

Here is the story:

It was in Germany in 1936 and a newly built ship was about to leave the harbor of Hamburg. The photo shows workers raising their arms for the infamous gesture, except for August Landmesser who is standing with his arms crossed, squinting.

August Landmesser became a member of the Nazi Party in 1931. He remained a member until 1935 when at 25 he decided to marry a Jewish woman named Irma Eckler. Under Nuremberg laws instituted in September 1935, Landmesser was not allowed to marry Irene Eckler, therefore they stayed unmarried.

Irene attempted to flee Germany to Denmark to find work, but was arrested and sent to jail for “Rassenschande», and sent to a concentration camp. Her last letter to her mother was sent in January 1942.

Agust Landmesser was discharged from prison in 1941 and in 1944 was drafted to serve in the war. He was later declared missing in action and believed dead.

I will remember August and I will make a new saying in my book:

to «take one like August» is to make a choice that is so hard that it might kill you, but you take it.

to take one like August is when all your mates goes in one direction and you choose not to.

Agust Landmesser missing in action, but not forgotten.