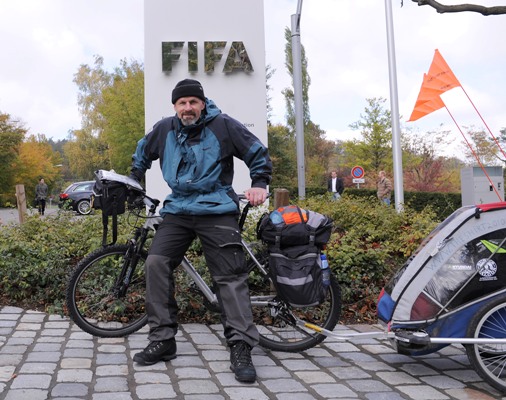 Okay,  I posted this in the morning…. so…

I have been asked to be serious about my short meeting with Sepp Blatter and FIFA.

Serious can be boring…., but here are my Sepp and FIFA facts if you want to dig in to it…..

The expedition which I did on a bicycle from Norway to the World Cup in South Africa was designed to give maximum attention and awareness for 43 million refugees.

To make that happen I needed help from fans, clubs, leagues, celebrities, and my family. It was a crazy idea, but it worked.

FIFA/Blatter was “the body” that created most media for 43 million refugees during my/our/fans/club project. On a great second place was fans ( they do not have a organization like FIFA ) and it was incredible what fans of small teams did. A big thank you also goes to Iron Maiden!

To create world’s unifying symbol – a huge big football jersey that was made of signed jerseys – that was the trick to motivate the media to write about the refugee situation. Barcelona together with Real Madrid, Liverpool together with Manchester United, big stars together with small men like myself and my mates. The hart and blod of the symbol ( The Shirt ) was made by the fans. I´m not FBI and I´m not judging today on 6. of may 2015, but yes it smells! and yes it need a big investigation!

Are you reading this?

Thank you for helping 43 million refugees!

Did you hide a very big bag with dollars in Switzerland????

If yes! – send it to www.unhcr.org

PS! The whole cycling trip to SA can be read onmy side-blog www.theshirt.no