I’m training hard now. I have never paddled over 4000 km standing up before. But then again there is no human who has done that so I can lean on that fact.

It is many things that should go perfect and should be on order before I start….  At the moment there is still adjustments to find and there is still muscles that is not hard and mean enough. There is still some training and pratctise on things that could happen. I know that there always is things that happens. The things you dont think about.

What happened yesterday freaked me out for a second. I did my not-so-macho-more-kind-of-a-lady-scream, I almost pissed in my dry suit, and I almost fell of my board and in to the icy North sea….

I paddled from a cozy fishing village called Holmsbu. Snow in the air, chilly wind and waves enough to train and prepair for the big boats and the waves I’ll meet on the Rhine, Danube and Black Sea.

The wind and waves escalates for a moment and I had to think about the direction. It’s the end of Norway I’m on. Next stop is Denmark and I’m not dressed for a 14 days floating trip over that Sea in 14 minus degrees, so I head for a bay. The trees around the bay and coastline covers from the snowy wind and the water surface goes flat. It’s 5 minutes with heaven. The paddling board and me are smiling.

Then out of nowhere It feels like YOU have dived under me and are doing a joke and shaking my board.  It’s flat water and I spontaneously shout “what the f*** was that”….. looking for stones, but Im on deep water.

Paddling for new 20 meters and then a new shake and a new shout.

Okay, my first thoughts;  – there is now dangerous sharks in Norway, the killer whale is on the west coast and don’t eat people (just seals), and the crocodiles are in Africa and Florida.

Then with those thoughts spinning, 3 meters in front of me, a black face torpedoes up of the ocean with two big and stearing eyes, and it blows in the water ……..  Thats the moment where I almost pissed in my dry suit.

A friendly seal that swims around and eat our fat cod and fine salmon.

Dont tell anybody about my scream. It will totaly ruin the macho image I’m trying to build up. 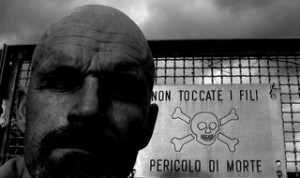 Bjorn @Heidenstrom on Twitter and starting the expedition  1 of March