Posted by: Bjorn Categories: Uncategorized
Comments Off on Fakta: Norge til Sør Afrika, The Shirt, 20.5.2010 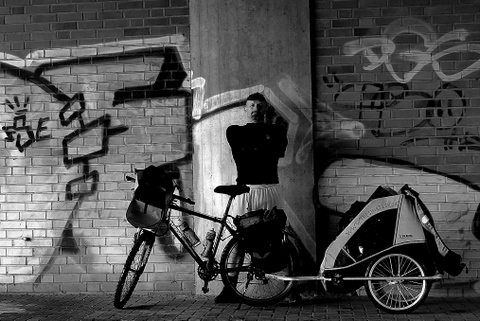 • Bjorn Heidenstrom has been cycling from Norway to South Africa to create increased awareness for the UNHCR and the world’s refugees. He has no sponsor and has dedicated many thousands of euros of his own money as well as more than a year of his life away from his family.

• His journey took him through 35 countries – approximately 20% of the countries on Earth.

• To date, it is estimated that 100 million people know about the project through TV, newspapers, magazines, social networking, radio and the Internet.

• The FIFA World Cup TV production crew in South Africa estimates that a worldwide TV audience of 1 billion viewers (1/6 of the world’s population) will watch their interview with Bjorn in June 2010. The interview is due to be shown in over 150 countries.

• ‘The Shirt 2010’ project is officially endorsed in writing by the Nobel Peace Prize.

• A key part of the project is the collecting of signed football shirts from around the world. This is ‘the symbol’ of the project. We have already received more than 600 shirts from over 40 countries. 120 kilograms of shirts were shipped from Norway to South Africa on May 11.

• In South Africa all the shirts will be sewn together to create ‘the world’s biggest football shirt’. It is expected that this achievement will be recognized as a new world record, and will feature in the 2010 Guinness Book of Records.

• The refugees will be at the very heart of the symbol alongside the NRC www.nrc.no and UNHCR www.unhcr.org

• All the players from teams like Barcelona, Manchester United and Liverpool have signed their shirts and donated them to the project.

• A music CD written and produced by an English musician has been dedicated to the project. ‘More than a Game’ by Jaime Morris is available on itunes and cdbaby: www.cdbaby.com/cd/JaimeMorris1
(you can listen to previews of the tracks here)

• On April 9, 2010 an English photojournalist, Justin Walley, joined Mr Heidenstrom in Nairobi, Kenya. Justin is the PR & Media manager of ‘The Shirt 2010’ during the FIFA World Cup. He has been on the road with Bjorn for 6 weeks so far and will accompany Bjorn until the World Cup final on July 11.

• Websites and blogs dedicated to the project receive, on average, 3000-5000 readers per day

• In South Africa Mr Heidenstrom will continue to spread awareness about the world’s refugees and the work of the NRC and  UNHCR to the world’s media, football fans and the 32 teams participating in the 2010 FIFA World Cup finals.

• In the autumn of 2010, ‘The Shirt 2010’ will be taken on a touring exhibition of Europe. The exhibition will include the shirts, photos from 35 countries, TV clips and stories of the refugees.

• Please stay in contact with us if you wish to be amongst the first press to find out about the official launch of ‘The Shirt 2014’.

• Bjorn is now 42 and works in Valerenga Football Club, Norway.

www.theshirt2010.net
The main site. The very latest mobile telephone number is displayed on the front page of this site in every country we visit.

Facebook sites: Bjorn Heidenstrom; The Shirt 2010; More than a Game